Samia Yusuf Omar was an aspiring middle distance runner from Somalia. Her untimely death at sea in April 2012 cut short her Olympic dreams  and the hopes of her beloved Somalia. Samia's is a story of resilience, strength and determination. One that deserves not to be forgotten.

Unlike other world class athletes, little information is available on one of Somalia's strongest female athletes.

Born and raised in Mogadishu, Samia was the eldest of six children. Gifted in physical ability, she struggled with access to proper facility, training and coaching. She had to navigate through wars, poverty, instability and inconsistent safety. In 1991, the year she was born, the Somali government fell and Mogadishu Stadium, which once hosted International events and competition, became a military compound for insurgents after housing UN special forces.  She and a few other athletes had few options other than a dilapidated Coni Stadium built in 1958 and the open road.
Duran Farah, President of the Somalia's national Olympic Committee stated: “Sports are not a priority for Somalia. There is no money for facilities or training. The war, the security, the
difficulties with food and everything – there are just many other internal difficulties to deal with.”
With no adequate track to run on, Samia was forced to run in the streets. She faced many threats and much harassment from insurgents who believed that as a Muslim woman, she should not be participating in sports at all.
Covering as she trained in public, Samia wore a hijab, sweat pants and long-sleeved shirts as not to draw ire from local soldiers.
Samia also had few opportunities to compete at different meets in the region due to logistics and other variables such as transportation, accommodation and political instability.
Without financial support from a National Organization, access to doctors, sports therapists or even a stipend for a proper diet, Samia continued to train without formal coaching and instruction in order to participate in the Beijing 2008 Olympics with Abdinasir Said Ibrahim a runner in the 500 m event. They were the only two athletes that were sent to represent Somalia. 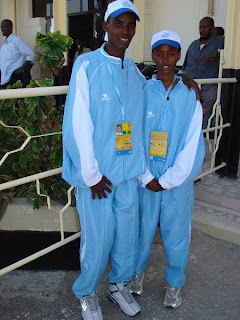 Samia was a middle distance runner but she was encouraged to run the 200m in Beijing for "the experience". She came in last in the race, at least 8 seconds behind the last runner in the event. She did not advance beyond the preliminaries. The crowd roared with appreciation as she came down the track to finish her race with pride and dignity.
Abdi Ibrahim also finished last in his heat and did not advance. Both athletes were outclassed by their competitors but their determination and drive shone through.
In preparation for the London Games Samia decided to move from Somalia into neighbouring Ethiopia.
An Al-Jazeera profile of Samia in 2011 confirmed that she left Somalia to find better training possibilities in Addis Abeba- a place where the sport of running is quite revered and respected. She had an opportunity to work with Eshetu Tura a former Olympian from Ethiopia.
Without having to contend with threats to her personal safety from Al-Shabab, Samia could focus on training for London 2012.
Samia's sister Hodan, spoke with the BBC's Newsday Programme from Finland. She said Samia left Ethiopia and first travelled to Sudan then up to Libya.
"She arrived in Libya in September 2011; for several months we didn't hear from her when she was lost in the Libyan desert and detained there, " Hodan explained. "But she decided to go by boat, and we told her not to, and my mother tried to tell her not to. But Samia was very determined and asked for our mother's forgiveness, and my mother gave it, and she took the boat, and she died."
According to unconfirmed reports Samia perished in an incident when the Italian navy approached the boat after they ran out of petrol and they asked for help. The Italian ship threw some ropes over the side for them to catch and swim to the navy ship. Samia was one of seven people- six women and one man who died trying to get on to the Italian ship.
It is still unclear whether Samia drowned or whether her body was recovered other than to say that she died in a "boating accident". Reports of her death were confirmed August 20, 2012 from Somalia's National Olympic Committee after she would have competed in the London 2012 Games.
Unofficially, Hodan said she had heard of her sister's death from other passengers on the boat.
Qadijo Aden Dahir, Deputy Chairman of Somalia's National Olympic Committee, said: "It's a sad death...She was our favourite for the London Olympics."
ZamZam Mohamed ran in place of Samia.
Samia faced obstacles at every juncture of her journey to compete at the highest level of athletics.


She faced disadvantages and hurdles such as non-existent resources and trained in conditions unfathomable to other athletes from around the world.
Athletes who, generally have the cultural and financial support of their homelands.
Samia was a courageous woman with a passion to run and an unmatched work-ethic considering her surroundings.
She overcame cultural barricades,  navigated through war-torn society, left her the comfort of her family and consistently aimed for higher goals.
To any observer, she is everything that is fundamentally good about athletes that is often lost in the material world of consumerism and show. She is humility, determination, drive and confidence.
Samia's story is about more than running or participating in the Olympics. It is an opportunity to highlight an aspect that should be recognized and respected in sport: the human spirit.
Samia may not have received a medal or sponsorship deals from Somalia but she was dedicated to representing her country and risked her life to prove that she could.
That is a triumph that should shine above her tragedy. 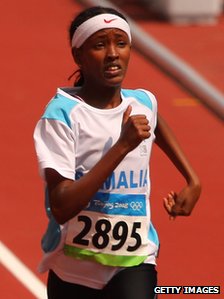 "We know that we are different from the other athletes. But we don't want o show it. We try our best to look like the rest. We understand we are not anywhere near the level of the other competitors here. We understand that very, very well. But more than anything else, we would like to show the dignity of ourselves and out country."- Samia Yusuf Omar, 2008